Mapping of fisheries and aquaculture side-streams and existing management schemes

European fish industry (EU-28 plus Norway) produces more than 10 million tonnes from which more than 2.5 million (25 %) come from aquaculture production (FAO 2020). Additionally, EU imported near 9 million tonnes of fish products for consumption in 2019.

In the European Union, the main aquaculture production is composed by fishes (51 % in weight) and molluscs (48,9 % of total weight), being the production of crustaceans and algae almost residual. Mussels (Mytilus spp) represent near 78 % of total shellfish production. Atlantic salmon is the main species produced followed by rainbow trout, seabream and seabass, while the most important wild caught species processed in Europe are blue whiting, cod, mackerel and herring in the Northern European countries and sardine, tuna and hake in the Southern EU countries.

Fish from aquaculture and wild caught fish may be processed by bleeding, gutting, beheading, filleting, skinning and trimming before being sold or further processed into other products like canned fish, surimi and other specialties. The yield in industrial processing is species-dependent and is often in the range of 30-50 %. These, namely by-products, unless valorised for higher valuable options, are generally considered as animal by-products not intended for human consumption.

Shellfish production and processing also produces a significant quantity of non-edible fractions with a high volume available that usually ends up as a waste.

The main destiny of fish by-products is the production of fishmeal and oil for feed. Due the demand and subsequent increase in the aquaculture production, between 2018 and 2030, the proportion of total fish oil obtained from fish by-products is projected to increase from 40 to 45 %, while for fishmeal this proportion will grow from 22 to 28 % (FAO 2020). However, not all by-products and other processing side-streams resulting from the fish production and processing are suitable for fishmeal production due to logistic reasons or because their composition imposes several technical problems or may reduce the product quality. Moreover, other side-streams such as aquaculture sludge are not allowed to be treated in the same valorisation route. Thus, a part, not negligible, could be used as raw material for fertilisers production, giving in this way a value to this residual material in a biorefinery cascade concept, which will be investigated in SEA2LAND.

Along the first months of the project, the involved partners will actualise the information on the provided side-streams for the project: volume produced, tendency, current management scheme, costs of treatment/disposal and geographical distribution. They will search information and identify other similar side-streams in their own and the other participant Regions with similar or complementary characteristics. Current projects and national or regional existing initiatives for valorising these side-streams will also be identified.

The Regions subject of study for mapping the aquaculture and fisheries processing side-streams are those where the pilot case studies are planned: Atlantic, Cantabrian, Mediterranean, Adriatic, North Sea and Baltic. 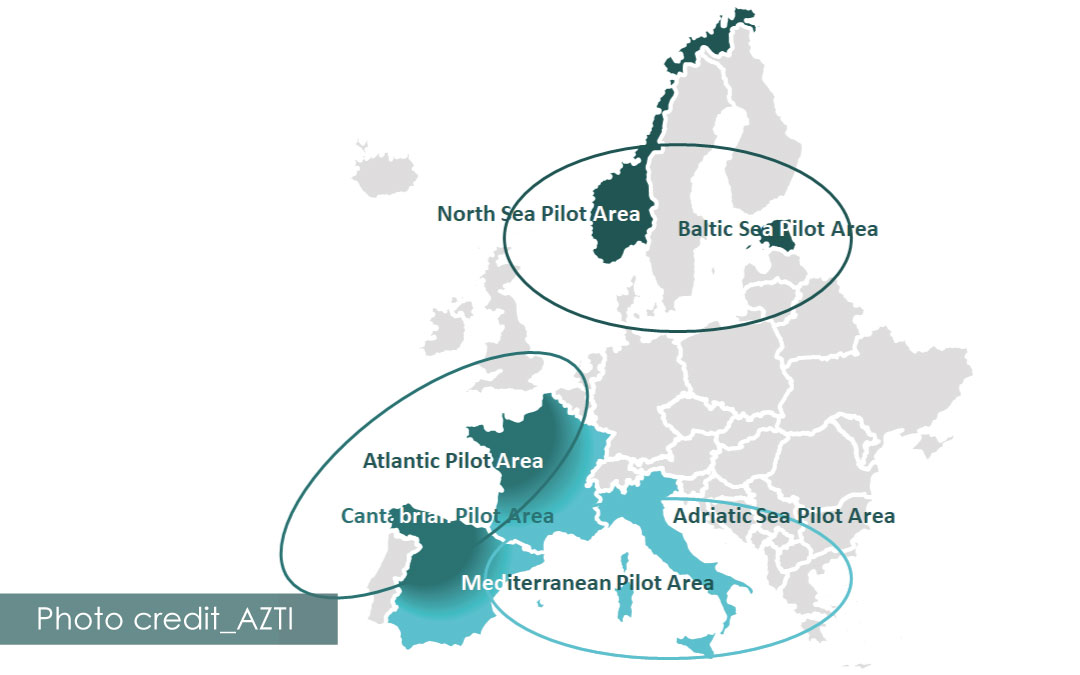 SEA2LAND Geographical pedoclimatic zones subject of the study where the project pilot case studies are planned.

This website uses cookies so that we can provide you with the best user experience possible. Cookie information is stored in your browser and performs functions such as recognising you when you return to our website and helping our team to understand which sections of the website you find most interesting and useful.

Strictly Necessary Cookie should be enabled at all times so that we can save your preferences for cookie settings.

If you disable this cookie, we will not be able to save your preferences. This means that every time you visit this website you will need to enable or disable cookies again.

This website uses Google Analytics to collect anonymous information such as the number of visitors to the site, and the most popular pages.

Please enable Strictly Necessary Cookies first so that we can save your preferences!